A few weeks ago, I proudly released the 1.0.0-alpha version of MCL , disregarding my resolution to release existing projects rather than work on new ones. In all fairness, this project isn’t of utmost importance and I’ll probably remain its only user, but to quote what I said back when I released SAW:

It’s not much, mainly because no one is using it besides me, which means I have no issues to deal with, no weird bugs that I can’t seem to reproduce… But it doesn’t mean that releasing it publicly is devoid of meaning.

So, let’s talk about colors, design, C++ and build systems! This post focuses on some technical aspects of the MCL, in no particular order. A (likely) next article will focus on color interpolation fun facts.

Once upon a time…

…there was an interesting article on Hacker News. It talked about procedural color generation, and color interpolation using the CIE LCHab color space. As it happens, I had already written a rudimentary RGB and HSV hybrid color class that I used for such a purpose, but it had several shortcomings, the main one being caching all fields of the two color spaces (R, G, B, H, S, V). As a result:

I was therefore usually using several color classes at the same time: this one for interpolation, translated into another one that I used with OpenGL code… It was far from being convenient. Inspired by that article, I launched head first into a better color class implementation, starting what would become the MCL.

From the start, I had a few goals that I wanted to achieve. While some of the funny features emerged later, while coding, those were intended from day 1.

I wanted to have a RGB struct that I could cast to a float*, a double*, or a unsigned char*, depending on the chosen data type. This would allow me to have RGB arrays that I could give directly to OpenGL, amongst other possibilities.

In addition to the color spaces I already knew (namely RGB, HSV and HSL), I wanted this future library to be able to also handle LCHab values, which were at the heart of the aforementioned article.

There already was a colormap implementation along with the old color class. It would need to be adapted to the new color classes, as this was the main feature I wanted to achieve.

Although this isn’t exactly a requirement, I used the excuse of C++11 to convince myself it would be a good idea to start a brand new project: I hadn’t yet written anything using C++11’s new features.

Due to requirement #1, I could not have different classes for each color space (RGB, HSV…) all inheriting from a common Color base class abstraction. The reason being, of course, the vtable. No inheritance means no vtable, meaning in turn that the size of the class should be the sum of the size of its elements, providing they’re correctly aligned. As the compiler isn’t allowed by the standard to modify the members order, the resulting class should meet the requirement.

It is worth noting, however, that relying on the fact that compilers won’t pad those classes with any kind of metadata is a bit ugly, as there is no rule in the standard that enforces such a layout (those classes being non-POD). Although it behaves correctly on all tested systems and all tested compilers, using that knowledge to do ugly casts (for OpenGL purposes for instance) is a direct step into the uncharted unholy territory of undefined behaviour. Fun stuff. :)

The best solution to have a generic Color class is to use functional programming tools: in this case, algebraic data types. As there is no native support for such types in C++ (unions do not count), I unleashed the almighty boost::variant, which allows the creation of pseudo “typed unions”.

Compared to a type hierarchy, such a type is at the opposite end of the Expression Problem: while it makes it tedious to add new color spaces, new types (something that is, in this case, unlikely, or at least uncommon), adding new generic functions over color spaces is easy, and can be done without modifying the existing classes. But more importantly, this type allows for easy, polymorphic, pointer-free use of different color spaces instances on the stack.

A naive way of implementing color space conversion would be to have all N * N conversion functions, which would be a hassle to implement. Instead, the MCL splits the different color spaces in three groups.

Each group has a “reference” type (highlighted above), which each type knows via a typedef. Converting from a color space A to a color space B is therefore done by moving along the resulting graph (see below). This severely limits the total number of functions needed. Furthermore, adding a new color space would only mean implementing conversion from and to its reference type. 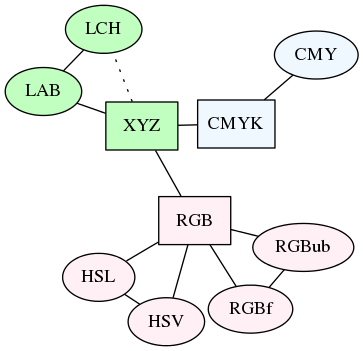 Those groups were not chosen randomly. They exhibit a nice behavior: color conversion inside a group does not depend on external parameters such as a referent white (except for one very specific exception: XYZ <-> LAB). Conversions from one group to one of the others do however require such parameters. They’re all bundled in a class called Environment.

All MCL functions that might need at some point to convert from one color space to another have a Environment parameter. For convenience, however, they all have a Environment-free variant that passes in Environment::DEFAULT, which specifies that all device independent color spaces have to considered as being sRGB with a D65 standard illuminant. Users that want to specify another behavior can inject their Environment instances in all calls, or choose the sinful path of overriding Environment::DEFAULT, which is mutable.

This also means users are free to plug any advanced function of their choice in the MCL, such as LittleCMS ICC profiles transform functions, to convert from RGB to CMYK for instance.

Most transformation functions can be expressed as endomorphisms: their type is Color -> Color. As such, they form a monoid, providing that we implement the equivalents of mempty and mappend, in this case id and compose.

While in Haskell this is really straightforward,

This allows for fun stuff, such as combining transformations, or even transformations folding: a list of color transformations can be reduced to a single one. This is also true for any user defined function over Color instances, as long as it can be implicitly made into an Endomorphism, which is defined as std::function<T (T const&)>.

Although this was not part of the requirements, this was aesthetically rather pleasing. It was also the opportunity to find a way to implement Haskell-like typeclasses in C++, for which I found a traits-based solution that I find funny if not particularly useful. I’ll speak more about it in an upcoming article.

Although I’m quite proud of how everything turned out, this library has several shortcomings.

If you want to see more details about some technical aspects of the MCL, the wiki of the project details each major feature of the library.